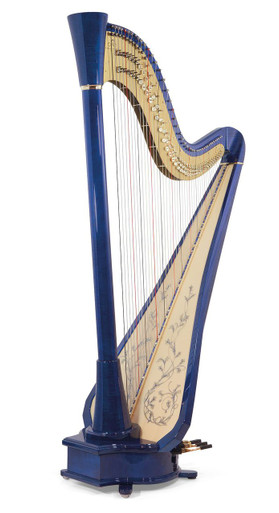 Since its introduction in 1985, the Camac Blue series of electroacoustic pedal harps has gained worldwide acclaim due to the clear, responsive sound when amplified or played acoustically.  Originally conceived for the jazz scene, the Blue series bridges a variety of diverse musical genres.  With unsurpassed Camac piezo pick-ups on each string, this electric pedal harp is the ultimate choice for the harpist looking for an instrument that effortlessly adapts to any style of playing. The semi-grand Camac Little Big Blue has 44 strings and an extended soundboard to enhance the acoustic capabilities of this lightweight and easily transportable instrument. The Camac Blue series is available in a variety of frames and sizes, all of which can be connected to special effects pedals.

Current production times are 4-8 months. Availability and time-frame will vary based on production schedule and model. Call 770-619-2920 or email info@atlantaharpcenter.com for more information.